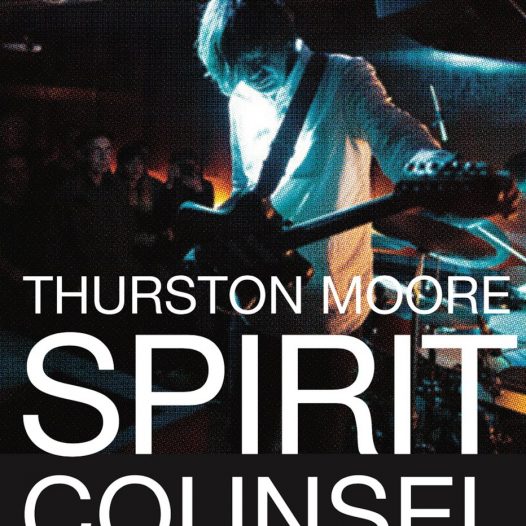 Spirit Counsel is perfect. What is it, though? It is everything that it should be.

Thurston Moore is an underrated rock lyricist. I’d put him in the same league as Iggy Pop, always cool-sounding and never hung up on anything soft like emotional depth, but I got the sense on Moore’s last two solo albums that the lyric-writing was starting to be a chore. He was also an underrated rock vocalist as well, something he will never get any credit for. This was partly because he had a disdain for singalong vocal melodies of the la-la-la chorus variety on the basis that they were too poppy. It was also due to his use of vocals as an instrument of percussion. Moore’s style of singing is easily comparable to Jimi Hendrix, another guitar innovator who is dismissively considered a so-so singer just because he was cool about it, but you can also read the influences of early hiphop and Chuck D in Moore’s vocal choices. Sadly, a lot of that went over listener’s heads at the time and is almost impossible to hear now, with so much musical water under the bridge. By the time of 2017’s Rock n Roll Consciousness, though, and to a lesser extent The Best Day (2014), I got the feeling that the vocals were the least interesting aspect of the songs to Moore and that he was straining at the structural limits imposed by having to be a frontman. Hence the move to an all-instrumental album with Spirit Counsel. Here now, we find an artist who has finally cleared away the debris and moved into himself.

Spirit Counsel resonates with maturity. Through the choices he makes in these compositions, Thurston Moore demonstrates that he is a mature musician in the best sense, no longer content to just namedrop artists like Sun Ra or Coltrane in interviews but brave enough now to go the mountain and be tested.

The breakup of Sonic Youth in 2011 put the kybosh on the ending of Goodbye 20th Century, a 2009 biography of the band that starts out strong but peters into banality, as if frustrated in achieving a conclusion by the apparently cosy domesticity of its leading couple. However, in the dissolution of the band and the fragmented solo work that has appeared in its wake, we find a metaphorical resonance with the extended deconstructivist breakdowns so characteristic of Sonic Youth’s finest songs, as each artist peels off in their own direction. Except that this is one of the ones where Steve Shelley’s solid drumming doesn’t bring them all back together for a final chorus, leaving an extended coda like the end of Express To Yr Skull (1986), a song we’ll come back to.

Looking back, Thurston Moore’s time with Sonic Youth now reminds me of John Coltrane’s time with Miles Davis. Coltrane was an integral part of Davis’ masterpiece, Kind of Blue (1959), but his superpowers really opened up on his own solo masterpiece, A Love Supreme (1964). It’s the same with Moore. Sonic Youth wrote their own legend with albums like Daydream Nation (1988), but now, with Spirit Counsel, I feel we finally have Moore’s A Love Supreme. It’s not just that the work is that good (although it is); it’s more that the work is on a similar level of importance.

Reviewers have described the work as experimental, but this is an unsophisticated response and detracts from a proper appreciation. When listening to Spirit Counsel online, it is presented as an album with three long tracks, but when you open the gorgeous box-set (courtesy of Cargo Records), you see that Spirit Counsel is presented on three separate CDs and is more like listening to a triple-album. The first disc, Alice Moki Jayne, is really a series of three distinct songs or movements hung together by theme, as opposed to this hour-long track that most reviewers breathlessly present it as. Really it’s no more experimental than your standard slab of post-rock and is all the better for it.

It is also not “experimental” in the pejorative sense of someone mucking about and potentially wasting your time, or in the pretentious sense of someone being deliberately avant garde for its own sake. The second disc, 8 Spring Street, is an homage to Glenn Branca, the New York symphonic composer who introduced Thurston Moore and bandmate Lee Renaldo to the concepts of alternative tunings, drone and microtonal dissonance, all of which they played with freely as Sonic Youth and all of which Moore brings to fruition in this work. This is part of a serious fifty-year development of ideas and expansion of structure by a master craftsman, rather than some wacky adventure.

Another of Branca’s early musicians was Michael Gira of the Swans, the other great No Wave band besides Sonic Youth of course, and I think it is possible that the bold decision to retain the length of the compositions in Spirit Counsel is in part made possible by the trailblazing work of the Swans, both live an on their comeback albums, in particular 2012’s The Seer with its thirty-minute pieces. Again, this is a meaningful development rather than wilful experiment or self-indulgence. In the studio, Moore’s songs of the past often evolved from extended improvisations that were then edited down and bolted together to form denser, hard-hitting tracks. They were great at the time but now they are so much more powerful that they have been allowed to just… be.

Returning to the coda of Expressway To Yr Skull, it’s worth noting that it appeared as the final track on the album Evol (1986) and that the original vinyl ran into a “locked groove,” so that instead of spiralling to the end of the disc, the needle would instead run into a circle and play the last seconds on an endless repeat. In the track listing, the song length is given not in numbers but with the infinity symbol. These songs were always meant to go on forever. When the band toured with Neil Young, he used to get stoned and lie under the stage listening to the feedback and willing it to continue for as long as possible. For Young, this quest for infinity led eventually to Arc (1991), which AllMusic compares to Lou Reed’s vilified Metal Machine Music (1975) but is actually a lot more fun. For Moore, the journey took a bit longer and turned up a lot more treasure.

So: should you buy this album? Well, if you’re still reading this article and you’re happy with the names I’m dropping myself, then yes, of course. The first disc, Alice Moki Jayne, is the best. It is divided into three parts: the first plays with a four-note melody from a recording by Alice “Turiya” Coltrane, and the rest is apparently an homage to Moki Cherry and Jayne Cortez. All three women were overshadowed by their more famous partners, and Moore presents the work as a feminist attempt to rebalance their legacy, which is ironic given that his post-Youth output has been overshadowed by the media in favour of the work of his former partner…

Alice Moki Jayne showcases Moore’s current weapon of choice, the 12-string electric guitar. Given the opportunities for tiny dissonances between the strings that the 12-string affords, it is surprising that he did not utilise them earlier in his career, but I expect it was due to the need to accommodate the guitar frequencies of his former bandmate, Lee Ranaldo, in the audio mix. The piece is at turns gentle and aggressive, evolving from gossamer fragility through noise to a headbanging conclusion; epic in scope.

The Glenn Branca tribute, 8 Spring Street, has a similar concept to Alice Moki Jayne, in that it takes a fragment of someone else’s music and blows it up to a bigger scale. In this case, Moore states that the signature of the piece is “a response to the motif of Glenn’s where the note structure is in repetitive, and downward, development,” except Moore reverses it so that the progression moves upward. It is a triptych of ten minute journeys out from a simple solo electric guitar bouncing against the echoed rhythm of a delay pedal into white noise feedback and eventually back around again. Towards the end it stretches out into a cosmic drone that is genuinely cosmic.

Galaxies is a live recording from a 2018 performance at the Barbican. It has two sections, one for twelve acoustic 12-strings and the second for twelve electric ones. The inspiration behind the piece takes in longstanding Thurston Moore icons such as Sun Ra and Alan Ginsberg, but, like most of his work, even the ones with lyrics, you wouldn’t know what it was about from listening to it. Fortunately, the audience were given programme notes as if they were at a classical event, and these are reprinted in the booklet that accompanies the box set. It is essential reading for fans of the album and even includes the tuning instructions for 8 Sping Street.

So, yes, you should buy it. And if you don’t like it? Then I pity you and your failure to make decent artistic choices and your failure to have a proper set of references to build from. This album is a measured and exciting contribution to alternative music culture and it represents the pinnacle of Thurston Moore’s career, who is one of the prime movers, so I have no interest in mollycoddling your lack of taste for the sake of phoney review balance. If you don’t like it then it’s not just that you don’t get it (which you don’t); but equally that I don’t get you.

But you wouldn’t be alone. I am utterly confounded by the relative silence that greeted the release of Spirit Counsel. It is by far the most interesting product of the post-Youth years for all concerned and makes certain other projects look a bit reactionary. Spirit Counsel is a meaningful and deep creation by a conscious artist. It is equal to the best of Sonic Youth and also to Moore’s solid solo work, including gems like his unexpected acoustic cover of New Order’s Leave Me Alone. Every time I listen to Spirit Counsel it has something new to say. The fact that it went largely untrumpeted reveals the shallow mediocrity of most rock media. But you and I are better than that. 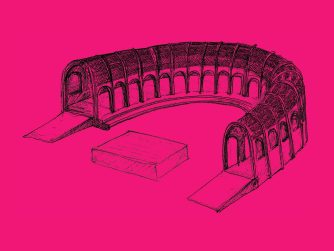 Hove seafront will be transformed into a Riwaq in May 2022 by the Brighton Festival director Marwa Al-Sabouni. Find out about the refugee... 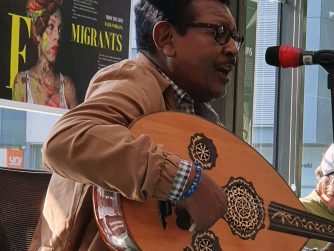 Celebrating Library Week in Brighton with a selection of live courtesy of Best Foot Music. Featuring Bashir Al Gamar from Sudan and Kourosh...

Mansour: “The Echo of Love”

Steve talks to the Kurdish musician Mansour Izadpanah about his life and work. Featuring a world exclusive premier of his new song... 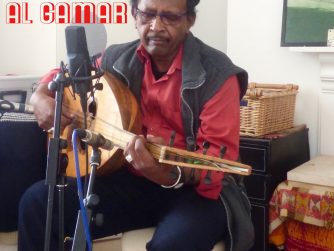 A preview of the forthcoming Refugee Week online concert with Best Foot Music, featuring interviews and live performances from Sudanese... 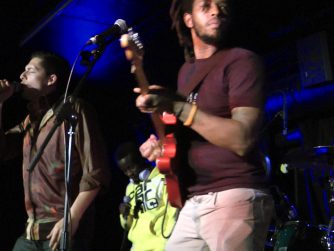 A selection of tunes from our house band, the Refugee Radio Orchestra, recorded in 2010. Hope you enjoy this fusion of refugee culture... 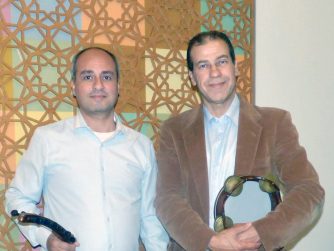